In a Photo-collage: REUNIFICATION OF EASTERN AND WESTERN ROMAN CATHOLIC EMPIRES CONFIRMED 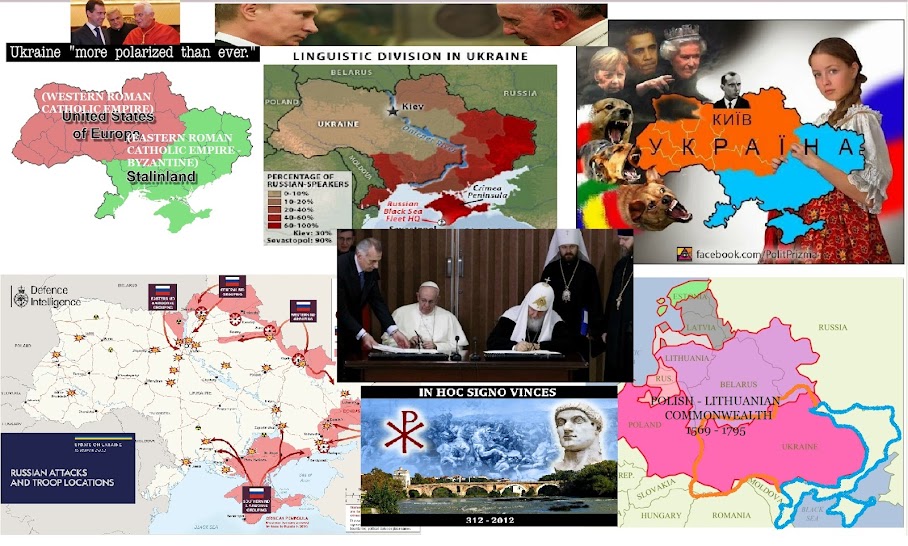 Above image: The present actual crusade of the popes in a photo collage. If an image is worth 1,000 words, some of them could be worth even 10,000 words. For some years Control Avles Blog together with Jesus Partisans in the Balkans and Continuing Counter Reformation blogs were exposing the Long March of the Devil to restore his Evil Empire, the Roman Catholic empire of Constantine (312 AD). We are not yet there, but it will be fulfilled, as a necessary step to usher in the last week of the seventy weeks of Daniel. Hope you are saved in the blood of Jesus, or you'll have an hard time.
*   *   *
9And here is the mind which hath wisdom. The seven heads are seven mountains, on which the woman sitteth.
15And he saith unto me, The waters which thou sawest, where the whore sitteth, are peoples, and multitudes, and nations, and tongues.
18And the woman which thou sawest is that great city, which reigneth over the kings of the earth.
[King James AV 1611] 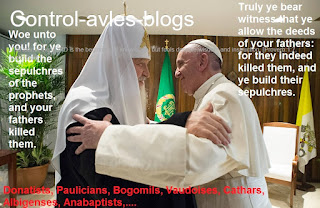 The Problem is YOU. 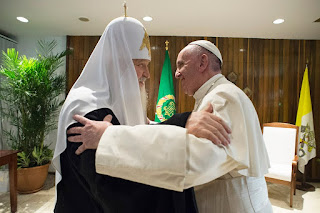 Religion that specialized in “mysteries” and is “unable to understand the Bible!”

In Revelation 17:5 she is called “MYSTERY, BABYLON THE GREAT, THE

MOTHER OF HARLOTS AND ABOMINATIONS OF THE EARTH.”

John is marvellously shocked at this apparition. He would expect pagan

Rome to kill saints and martyrs, as he was in exile at this time by pagan Rome

for testifying for Christ. But John is looking into the future, and he has been

caught up to the “day of the Lord” to see these visions, and he looks down at the

professing church of Jesus Christ, the professing bride of Christ, and finds out

that she’s the foremost murderer of Christians! This is not pagan Rome. Why would John marvel about pagan Rome killing Christians when he was one of the

ones they were trying to kill? The thing he is looking at is that great “mother of

the faith”—Holy Mother Church. Do you know what the Holy Ghost says she

Catholic Church does not like the Authorized Version; this is why Liberal and

Orthodox scholars have put pressure on revision committees for hundreds of

years to get rid of the King James Bible (AV), and replace it with such

Catholic Church for England and the U.S.A. The reason that the Roman Catholic

Church tells its people that they cannot “understand the Bible,” the reason why

Protestant scholars teach that the Book of Revelation is apocalyptic, symbolical,

and “figurative,” the reason why Protestant teachers and preachers do not teach

the Book of Revelation, the reason why God’s people think the book is “hard to

understand,” is because Revelation 17 tells the world that the “mother of the

faith,” “Holy Mother Church,” is in reality a religious prostitute. That is not the

interpretation of Dr. Peter S. Ruckman, and that is not the teaching of the

Baptist Church; that is the infallible, inspired word of the Holy Spirit, in plain

Sixth Grade English, where anybody with an I.Q. of 90 could understand it.

(And you do understand it! The only problem is what to do with it.) Why, today

churches, he would have all of Christendom down on his neck! What do you

Catholic Church was a religious prostitute? That’s what God said about it! The

THE REVELATION OF JESUS CHRIST

[you can find also on Kindle or freely downloadable here and there, just search it on the web]

> Calvinism, Lordship Salvation, etc., are theologies of Satan. It is very easy to debunk them as they are founded on blatant manipulations of the Bible:

Genesis 11:6-7 and Judges 7:22 applied today to the Global Warming debate

Judges 7:22 “And the three hundred blew the trumpets, and the LORD set every man's sword against his fellow, even throughout all the host: and the host fled to Bethshittah in Zererath, and to the border of Abelmeholah, unto Tabbath.” King James Version (KJV)

In the Bible there's the account on how God protected Israel from a very powerful enemy army pouring a spirit of madness in their enemies and making them to mutually fight and kill each other.

This is another example on how history or better, His story, has ever been shaped on the command of separation and division:

Genesis 11:6-7  "6 And the LORD said, Behold, the people is one, and they have all one language; and this they begin to do: and now nothing will be restrained from them, which they have imagined to do. 7 Go to, let us go down, and there confound their language, that they may not understand one another's speech." KJV

The world today has been preserved from to be unified under Satan's control with division and separation. Sometime we don't understand the chaos in the world, but this evil, which is a product of the fall of Adam & Eve from grace, is used by God to prevent Satan's conquest of the world.

An example of this can be seen for example in the debate about the causes of Global Warming. The most recent comments below an article against the theory of the solar activity as the cause of it, shows clearly how much the army of the Global Warming supporters is busy in a fratricidal war. Beginning from the most recent comments (see the user Alan Lowey as the beginner of the thread), secular evolutionists and Genesis deniers army is divided between the ones supporting the human cause for the GB (via CO2 human emissions), and the ones supporting a natural cause as evidenced by alleged cycles of GB occurred in ages well before the industrial age:

Both fronts deny the God of Bible, as they believe in the Deep Time and Evolution. But at the moment cannot stand unite because they're engaged in a civil war. This is still the same intervention of God mentioned in Genesis 11:6-7 and Judges 7:22. The same intervention occurred in Europe 500 years ago when God divided Christianity creating the Catholic front and the Reformation front. Thanks to that division, the world could experiment some centuries of true missionary activity brought abroad with the help of the KJV.

God therefore keeps His grace on man thanks to the division. This will stop only at the Tribulation. Tribulation is the age of wrath, as opposed to the age of grace which is the one of the present time. For a short time Satan will be allowed to unify the world - as he ever dreamed. For example when he tried to erect the Babel's Tower.  God needs that His enemies have to develop the most lethal power and force, before to destroy them. God shows to be the true God in not destroying a weak enemy, but a strong one. He is the God of the Sea, or, better, the God that shows Himself as the One who controls the Chaos of the Waters (the paleo-Hebrew meaning of the the word "Elohim").

Some videos about the theme to watch and study. The first two are KJO, which I support, the others not; these last ones are exposing the true meaning of the first words of the Bible, to understand the character of God, and to explain better the Last Days:

Are There Christians in the Tribulation?

Jesus in Genesis: 1. The First Word of the Bible

Jesus in Genesis: 2. The 2nd and 3rd Words of the Bible

The figure of the modern secular scientist, not only a Bible denier, but a denier of anything spiritual or supernatural, and an high priest of the Evolutionist religion, is contained in the description of the Antichrist, Daniel 11:37 ------->

Daniel 11:37-38  37Neither shall he regard the God of his fathers, nor the desire of women, nor regard any god: for he shall magnify himself above all. 38But in his estate shall he honour the God of forces: and a god whom his fathers knew not shall he honour with gold, and silver, and with precious stones, and pleasant things.  King James Version (KJV)

Video: Amazing Dispensational Truth from Genesis to Revelation - MUST SEE FOR TRUTH SEEKERS!

Above video: Amazing Dispensational Truth from Genesis to Revelation - MUST SEE FOR TRUTH SEEKERS!

Scripture, doctrine and history of the Lord's flock: